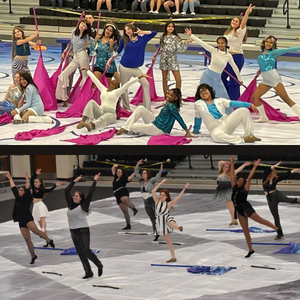 The Spirit of Waxahachie Winterguard program was very successful at the North Texas Color Guard Association Contest held at Waxahachie on Saturday, March 19.

The junior varsity team, which consisted of all first-year members, came in fourth in the Regional A classification and first in General Effect. This is a huge accomplishment for this group because these students have only been competing in color guard since October.

The junior varsity show titled “Studio 287” featured the music of ABBA, including Fernando, Dancing Queen, and Mama Mia. The fun-filled show transported the audience back to the ’70s disco era with costumes that sparkled like a disco ball.

The varsity team took sixth place at the Berkner contest in Scholastic A. This success put them in a great place out of 30 teams that will compete at the Championships in April.

The varsity show titled “Jazz Café” included the cover music of MC Hammer’s Can’t Touch This, performed in a jazz arrangement by Aubrey Logan. This arrangement took the popular hip-hop tune and spiced it up with trombone solos and creative scat singing, both with a jazz twist. The color guard members wore an assortment of costumes in black, silver, and white to imply a night on the town at a sassy jazz club. With the addition of a stage, tables, and chairs, which were used to dance on, the set transformed the space into the “jazz club.”