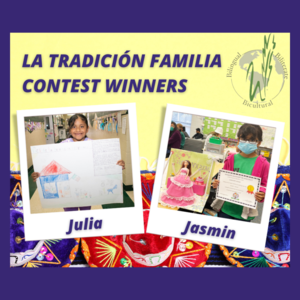 Dual-language students expressed traditions important to their families in the Hispanic Heritage Month Contest through written word and art.

The contest, titled “La Tradición Familia” or “Family Traditions,” focused on a family tradition and how it connected to culture. Students at Waxahachie ISD’s dual-language enrichment campuses — Dunaway Elementary and Wedgeworth Elementary — participated in the contest. Contestants were required to include a written piece and then produce a product that reflected the tradition.

The contest was divided into two categories — kindergarten through second grade and third through fifth grade — and a winner was selected from each.

Julia Flores from Dunaway won the kindergarten through second-grade division. Flores wrote about her family celebrating Mexican Independence Day and depicted the holiday with a drawing of her family grilling at home.

Jasmin Mendoza from Wedgeworth won the third through fifth-grade division. She detailed the tradition of a Quinceañera with a 3-D display.

“It was the way each student described how meaningful the tradition they chose was to them,” Aleman said. “Both Julia and Jasmin included details describing how celebrating Quinceañeras and El Grito de Independencia were fun, but in the end, it was more about family.”

Bilingual Coordinator Desirae Zarate noted, “Each winner uniquely expressed the value of family, which has been passed down to them and will continue through them.”

Additionally, the products that each student created had elaborate details of their Hispanic culture and through these symbols and objects, they displayed their pride in their heritage and traditions.