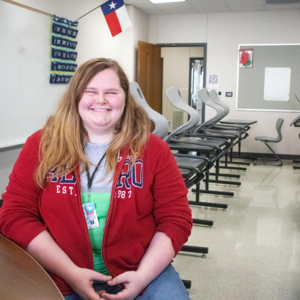 One Waxahachie High School creative writing class has become a safe space for many students. That environment influenced Jordyn Randolph to express the life-changing news she received in November.

Randolph grew up not knowing the ringing in her ears was unusual.

“Sometimes sounds would just dim,” the sophomore explained. “I’d just hear a ringing. You know, kind of like in movies in an explosion scene, and there’s that eerie sound. That’s what it sounds like.”

Doctors diagnosed Randolph with vertigo in November when she also underwent several hearing tests. That was when she found out she would lose her hearing entirely by high school graduation. The results were so serious that doctors encouraged Randolph to start learning sign language.

The day after Randolph learned about her gradual hearing loss, she shared the news with her class. It happened to be the same day her creative writing teacher, Ashley Teague, gave her students an assignment to participate in the New York Times Second Annual Personal Narrative Writing Contest.

“Her emotions were raw and fresh, and she didn’t hold back how she was feeling,” Teague recalled.

Randolph usually enjoys the art of writing, creating fantasy worlds and characters of her own. But this time, she struggled with choosing a “meaningful life experience” to write about. Teague suggested she write about her recent life event to help process her emotions.

Randolph agreed months after her first draft that the writing was indeed therapeutic.

“I’m not the best at expressing my emotions,” Randolph admitted. “I tend to bottle them up and especially something as big as [my hearing loss]. Writing about it made me feel better.”

Teague said Randolph wrote her first draft immediately, allowing those honest and real emotions and fears to pour out on the page. Each student read and made suggestions for the short story “that made each one of us cry.”

“This kind of vulnerability is a rare sight in a high school classroom, but Jordyn was unafraid to share the true hardships that she was facing in her personal life,” Teague expressed. “I will never forget that bravery and the story she was able to create through it.”

Randolph recalled crying after she had spent time writing one day as she was unsure of what the future held. A friend consoled her and she took the advice to embrace her final years of enjoying the chirping of birds and the sound of a car starting down the street.

Digging deep and deconstructing her emotions into 600 words or less, Randolph’s short story made it through four rounds of the New York Times writing competition. Randolph’s narrative placed in the top 95 stories out of approximately 9,000 entries from across the nation.

Randolph was excited when she read the email naming her as a finalist in the contest and immediately shared the good news with her family.

Randolph sees her writing as a hobby and aspires to earn a degree in aerospace engineering with a minor in Japanese language and literature.

Before the Silence Settles

It was one of those playful cartoons that I was looking at—the ones where it looks like it's straight from a newspaper—and it was talking about hearing. All of a sudden, amidst the beeping sounds, everything went completely silent. For a time, I couldn't hear anything. I just sat there in the chair as the haunting reality began to set in: I would be losing my hearing. The ringing and the silence made it all the more real as the hearing specialist handed my mother papers. I still have no idea how to feel as the news is still very recent. At times, it doesn't feel real, yet at other times, it is beginning to.

I’ve been using my humor as a means to distract myself from the inevitable. I jokingly talk about how I sometimes can't wait for my hearing to go away, especially when I’m sitting on the crowded bus or next to annoying students at school. What am I going to use when that doesn't work anymore though?  I go around all day with the heavy burden of my unknown future weighing me down as if it's an anchor with me as a paper boat getting dragged down to the deepest depths of the ocean.

We as people are always so apologetic towards others with disabilities or impairments. When they talk about their experiences, we always say we're sorry as if we could change it, as if we could turn back time and stop anything that caused it from happening. But we rarely actually mean it; it’s just a front we put up because we can’t possibly understand. But now, I finally do understand what it’s like. I find myself hating the things people say around me when I tell them my story, the same things that I used to say to others. I’ve learned that no one really knows what it's like to go through something like this until they do themselves.

I just can't help but think: Could this have been prevented? What's going to happen now? Will I miss sound? Of course I will. I love music; I love sound. I'm finding that I even love sounds that aren’t very nice. What scares me the most is waking up unable to hear. Will I handle it well? I don't know. I'm not sure of much right now, but I know I'll be okay. To say I’m not afraid is a lie. I am. I fear the days I'll never hear my favorite show again, my favorite song, or even the voice of my grandma. How is one even supposed to process the fact that someday soon they'll be partially or completely deaf?

For now, I’m going to try not to stress myself out with the what-if’s and the fears I have moving forward. I shouldn’t cry over a future that hasn't happened yet. I should live in the moment and cherish the time I have left. It's going to be hard. I know that. One day I'll look back on these moments and wish I had done things differently.  So for now, I just move forward one step at a time.  For now, I take care to listen to everything carefully—the typing of keyboards in the computer lab, the birds chirping in the morning breeze, the cars starting down the street. No sound is too small, or unimportant. I'm learning to love even the smallest sounds my hearing still allows for.