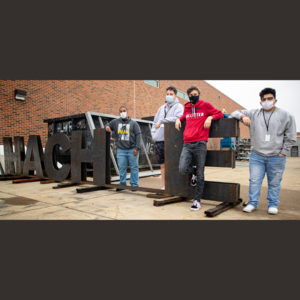 Waxahachie High welding students who worked on the public art project are Fabian Baltrip, Dylan Vencill, Samuel Rogers, and Gabriel Rodriguez. Those not pictured who also contributed to the project are Rylan Henzler and Trenton Hogan.

Advanced welding students spent the past month focused on the construction and fabrication of four-foot-tall HACHE letters that deliberately exclude the “I.” The intention behind the missing letter is for downtown visitors to interact with the display and pose in its place for a memorable photo.

Jake Mullican, WHS advanced welding teacher, said the goal of any project is to prepare students for post-secondary endeavors.

“One of my biggest passions is being able to have students work with members of the community on projects like this,” Mullican explained while he pointed to the numerous projects housed in the welding shop.

Fabian Baltrip, a WHS senior in the welding II class, cut out most of the metal letters with a CNC plasma table. This is the largest project he had worked on all year that also had the most sentimental value.

“I’m surprised I was able to accomplish this,” Baltrip noted while he stood by the nearly completed letters. “This is something I didn’t see myself doing at the beginning of the year. It was cool and fun.”

Baltrip began his Career and Technical Education journey in the Agriculture, Food, and Natural Resources career cluster when he took agriculture mechanics his freshman year and welded for the first time.

“I fell in love with it,” Baltrip emphasized.

After four years of welding experience in the classroom, Baltrip plans to enroll at Tulsa Welding School in Houston where he will specialize in pipe fitting. Baltrip recognized his teachers as the motivation behind the decision for his future in trade school.

“Mainly my teachers have talked to me and helped me grow,” Baltrip elaborated. “Having me do projects like this kind of made me mature mentally. They really are the biggest reason I’m here right now.”

Baltrip expressed he is proud of the work of his classmates and is excited to see the final product in downtown Waxahachie.

Wyatt Caverly, a WHS sophomore, played a role in the creation of the letters and had a more personal take on the project since his mother, Amber Adams, who was the mastermind behind the idea.

Wyatt Caverly, a WHS sophomore, played a role in the creation of the letters and had a more personal take on the project. His mother, Amber Adams, who was the mastermind behind the idea, is a member of the Waxahachie Downtown Merchants Association, who funded the project, and is a downtown boutique owner of The Velvet Angel.

“It was cool that we were doing something for the city that also brings business to the community and helps the small businesses downtown,” Caverly noted.

Caverly said the best part of this project was working on it with his classmates to improve the community with something that could benefit small businesses like his mother’s.

While the project gleams on student resumes, it will also serve as a downtown attraction.

Adams said she initially pitched the $2,000 project to Mullican a year ago. After a long list of community projects had been completed, WHS students had the opportunity to start the project this spring semester.

“I’m thankful to be able to collaborate not only with people downtown, but the school where my son goes,” Adams said. “It’s nice to have everyone work together, especially in a time like this.”

Adams looks forward to the letters becoming a staple in WISD senior photos and an iconic piece for downtown Waxahachie.