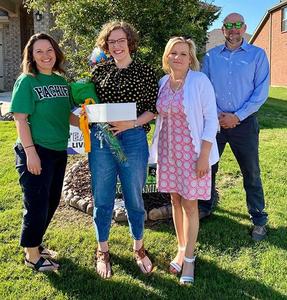 As Rebecca Ramirez sat down and read to bilingual students for DEAR Day, she no longer questioned what she wanted to major in when she moved on to college.

"I loved going to school, and the longer you go, the more you don't want to be there," Ramirez said. "Even though I'll only be an elementary school teacher, I want to make it an environment where kids want to go to school — like actually want to go."

Ramirez — the Waxahachie High School 2020 valedictorian — will attend Southwestern University in Georgetown to major in elementary education and intends to minor in Spanish in hopes of teaching a bilingual class like the one she read to at DEAR Day.

In high school, Ramirez balanced her academic life with extracurricular activities and plenty of clubs. She was involved in theater her entire high school career, where she served as the dance captain for musical theater. In her first two years, Ramirez worked on the crew-side of the performances and made the transition to center stage in her junior year.

"It really made me come out of my shell a lot because I'm super shy," Ramirez reflected. "I still am, but being on stage and performing forces you to be very vulnerable, and I think that's the biggest thing, it gave me so much confidence being in theater."

Her first musical show was "Mary Poppins," where she performed the difficult tap number "Step in Time." She had the opportunity to dance it out at the Dallas Summer Musicals Awards in front of hundreds of people after being nominated for Best Musical.

"That was the best moment ever," Ramirez noted.

Always observing from a distance was WHS theater director Andy Reynolds. "She was shy, but I also saw a hard worker back there," Reynolds said. "By the time she got through her junior year, I knew she could do more. I started to give her more leadership because people respected her so much. She was that quiet servant leader, and a lot of the kids responded to that."

When Ramirez wasn't high kicking it on stage, she served as an officer of the National Honor Society, Culture Club, Interact, and was a founding member of the Art Club.

She also served as president of the National Spanish Honor Society, which played a significant role in her life. The club served as a vehicle to learn more about Spanish but also enabled her to express her philanthropic side with a clothing drive. The excitement carried in her voice as she continued to explain her self-driven projects. She became a founding member of the Art Club and shared that her "Influential Educator" was art teacher Breelyn Wright.

"Art was always my favorite because it was so relaxing," Ramirez explained. "She would play music, and we'd get to paint and draw. It was my stress reliever."

She continued, "If I had a tough day at rehearsal, we'd be able to talk about it and get it off my chest. She is so easy to talk to and just so kind and awesome and inspiring."

Wright had a lot to say about Ramirez's spirit and hard work ethic. "Becca exhibits the best qualities in a student, in fine arts, and in academics," Wright said. "She is kind, funny, intelligent, creative, and contagious. I am going to miss her SO much and cannot wait to see the educator she will become."

Ramirez is also proud to be to a Gates Scholar.

Looking back at high school, and especially with the senior year wrapping up sooner than intended, Ramirez suggests current high school students "take in everything that's happening."

To Ramirez, the valedictorian title does not reflect the smartest person in her class. She believes that everyone is smart and then referenced her classmate Ben Barker for instance. "He is brilliant in music," she said.

She continued, "I don't think I'm the smartest person. I think this was the thing I was able to be best at."

Ramirez hopes to be remembered by the determination that she invested in her classes and extracurricular activities.