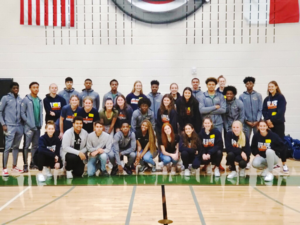 Waxahachie Lady Indian basketball players found more ways than one to bond with their most recent opponents.

Friday’s match was significantly different in more ways than one, too. Not only was the opponent a non-district team, but one from Australia — The Aussie Basketball Travelers.

The Aussie Basketball Travelers is a select team comprised of elite players. While in the States, they will compete in Fort Worth, Austin, and North and South Carolina. This visit also allows them to be prospects for college opportunities.

The Aussies had the ultimate Waxahachie High School experience as they were paired up with WHS athletes and attended class with them throughout the day.

“They were in awe of how big our school was and how nice it was for a public school,” Zuniga said. “A lot of them go to private schools that their parents pay a lot of money for them to attend.”

But it’s more than just a game.

Zuniga wanted her players to see what life is like for others who live across the world. That perspective was shared with other WHS students as the Aussies walked the halls and became classmates for the day.

“It was so cool to see how our cultures are so different,” said senior guard Halle Becerra. “They go to all-girl schools, wear uniforms; they can’t have their phone or food in class.”

School spirit from students impressed the Aussies, who said WHS was something straight out of a movie. The positive relationships students have with teachers was also a shock.

“They don’t have relationships with their teachers at all,” explained senior Rayna Ross. “It’s like a warden-type relationship. It felt like our school system compared to theirs is very relaxed.”

Hearing the drastic differences in culture brought a new perspective to the student-athletes, and they understood how grateful they are for their surroundings. Junior Mya Williams noted several Aussies discussed the fires going on in Australia, impacting the players’ families as well.

“It’s crazy how we were born in this town and given so much; like, this was given to us,” Rayna said as she motioned her hands at the campus. “We didn’t pay for this school. It was taxes; it’s not something we just get. You would never think on the other side of the world that they don’t have the opportunities that we have.”

The Lady Indians expressed it was great exposure for them to play an international team as it benefits the program as a whole.

The Waxahachie Lady Indian basketball program was the ultimate host to the Aussies as they created friendships with the players and hosted a barbecue dinner at The Reservation after the game.